“There is no Food Freedom without a proper reintroduction.” – Melissa Hartwig Urban

This is 100% true, but so many Whole30ers struggle with or skip the reintroduction all together. This post is to help you be convinced of the importance of reintroduction and help you navigate some of the most common mistakes and questions I have seen as a coach.

I get it – it’s called the “Whole30” – isn’t it over on day 30? NO! I absolutely fell trap to that my first and second successful Whole30’s. I felt awesome from my reset and didn’t pay much heed to the reintroduction idea. I was just going to feel this way forever. Until those old habits came back faster than I would have expected (where did my invincibility from Day 30 go?!) and I slid right back into my old relationship with food. Except now I knew how good I could feel and was frustrated with myself for not living up it.

It’s easy to think you are just going to live #whole30forlyfe but that’s not the point of Whole30. The point is to eat as broadly as possible while still feeling as awesome as possible. Most people who complete a Whole30 say they feel “better” than the way they were eating before. But how do you know which foods were giving you headaches, interrupting your sleep, making you moody or giving you acne if you don’t test them out systematically. (Psst – you DON’T!). Elimination and reintroduction is a fairly common protocol among allergists to help patients understand what doesn’t work for their body.

I often compare reintroduction to shopping. How do you know that beautiful dress (or suit, shoes, etc.) is worth it? You start by flipping the price tag over and checking the cost. If it’s your wedding, that $1000+ dress is absolutely worth it. But for regular occasions, that’s generally way too expensive for a new dress.

Reintroduction is how you know the “cost” of your favorite foods when wondering if they are “worth it.” Without reintroduction, there is no known price tag to gauge your decision in each setting of “is this worth it?”

I used to drink milk like water, it was my absolute favorite beverage. But once I learned, through reintroduction, that milk is highly correlated to my adult acne I’ve struggled with for decades, I ditched it. That cost was way too high for me. Once I knew, it wasn’t a battle to not drink milk. It came internally – I didn’t want to because of the cost I knew it had. And that’s where your food decisions should be coming from, YOU, not some arbitrary diet. Knowledge is power!

This meme I created in January 2019 gets a good laugh, but it really hits the head on the nail. I have had client after client tell me they didn’t want to reintroduce because they were afraid – afraid to lose how good they were feeling. But, the goal isn’t to eat Whole30 for life because Melissa Urban said to…it’s to figure out what works for YOU.

Reintroduction is exciting! It is so incredibly empowering to know what was causing my adult acne after 2 decades of harsh medications and scaring. I get to chose if that milk or cheesecake is worth it, if those breakouts are worth it. I am not a victim to the acne anymore that I could not for the life of me keep at bay for years.

It’s so incredibly empowering to know that gluten makes me moody, gives me brain fog, and depressed. I thought my 5pm-banshee-screaming-at-my-kids moments were just a normal part of having #somanykids. Don’t get me wrong, my crew is tough, but I learned gluten for me plays a powerful part of that moodiness. Making that connection was huge for me!

Trust me, reintroduction is the exciting part of your Whole30! Do your reintroduction, get empowered! Plus, I always reminded my clients how reintroduction is like training wheels (and analogy from Food Freedom Forever)  – you are testing out these foods in a controlled environment of reintroduction and that’s much safer than just hoping onto your food freedom bike and hoping you can ride it without crashing!

There are two choices in a Whole30 Reintroduction – Fast Track & Slow Roll. If you aren’t familiar with the difference, read this reintroduction article from Whole30. But here’s the thing – I too often saw clients doing the “Slow Roll” as an excuse to delay reintroduction (see Mistake #2 for why!), but then never really systematically reintroducing anything. Instead they go an extra week or two on their Whole30 and then nose dive into a baby shower cake or wings & beer or what have you. Gone is the clean slate and opportunity to reintroduce.

Melissa Urban recently addressed this directly in a Whole30 Newsletter:

“…in watching the general population Slow Roll over the last two years, it’s come to our attention that many people aren’t using it the way I originally intended. Instead of sticking with a mostly Whole30 approach; making a conscious, deliberate decision to reintroduce something special/delicious in the moment; then limiting reintroduction to just that food and paying close attention to the results… it appears they either misunderstand or flat-out struggle with the Slow Roll. They’d continue their Whole30 for an extra week or so, then just start eating what they felt like eating. Not conscientious. Not carefully considered. Not returning to the Whole30 in between. Not paying attention to the results. Not really a “reintroduction.”

…if it’s your first Whole30, if you’re one of the ones struggling in your Food Freedom and have never done a structured, deliberate reintroduction… FAST TRACK FOR YOU. If you want to space it out a bit more because you just feel so good, go for it! Break up food groups (like corn vs. other non-gluten grains) into their own separate days, or allow three days of Whole30 in between instead of two. Either way, it should take at least 10 days, and I ALWAYS want you to plan it out carefully ahead of time and stick to the plan.

If you belong to the specific group of people where a 10-day Fast Track could have serious consequences, consider taking on the Slow Roll with the help of a Whole30 Certified Coach…or consider a very spaced out Fast Track, planned in advanced and followed carefully, allowing time for extra Whole30 days in between in the case of a serious adverse reaction.”

Make a specific plan for your reintroduction, do NOT leave it to chance. Give your brain an inch of wiggle room and you will nose dive into cupcakes on day 31 (you deserve better, ps). Not sure what Fast Track plan should look like? Here is a FREE printable Reintroduction PDF calendar for you!

Mistake #4 – Trying to Stack your Reintroductions

“I reintroduced _______, and felt fine. Does that mean I can keep it in for the rest of my reintroduction?”

Reactions to food can take time and can be super subtle. You may not connect that having a hard time thinking clearly at work might be related to the gluten-free grains you reintroduced. If you haven’t before, take a gander at this list of NSVS – which is all the things that can be affected by the foods you eat! Then if you keep it in, because you are “fine” and add another reintroduction on top of it, say gluten, you can’t clearly know that the new side effects are due to the gluten, when it might actually been a more subtle reaction from the GF grains.

Lesson: even if you think you are “fine” after a reintroduced food, wait until after all your reintroductions to bring it back to stay ; ).

In between each reintroduction day, you need at least two Whole30 eating days to reset before you reintroduce another food group. Again, I know, we called it the Whole30, but really it’s more like a Whole42. This is mission critical to make sure you have time to hear what reactions your body has to the food you reintroduced and then reset before reintroducing something else.

Still feeling crappy from the last reintroduction? You don’t have to reintroduce on that 3rd day after your first reintroduction, in fact I recommend you wait until you are back to feeling Whole30 awesome before you move on to reintroducing the next food. This goes for if you got your period or a cold or anything else outside of the Whole30 as well that might muddle what reactions your body might be having. Hard to say if that food made you bloated and moody when your period just showed up! We want those results as clear as possible! So, wait until you feel back to awesome to reintroduce the next food.

Mistake #6 – Not “hearing” all the Reactions

“It didn’t make my stomach hurt, so I think I am good.” <— insert eye roll here.

I just have to make it a point to say it: again there are DOZENS of ways food affects your body, mind, mood, etc. Just because it didn’t physically cause you pain does not mean it doesn’t “affect” you personally. Please keep tabs on all of the NSV items, again these reflect all of the many ways your body might respond to food (so any of these taking a turn for the worse could be a reaction to that reintroduced food). There some more on this in this Whole30 blog post.

I highly recommend you do some kind of tracking for your introductions. Here is my Fast Track Reintroduction Journal for you!

Mistake #7 – Not Reintroducing Every Time

I get it, you might have already done a successful reintroduction and now know the side effects of what foods have on you. So…do you really need to do it again?

Why? Your body/gut might have healed and now you can tolerate some foods better than you did previous (yay!). I can also attest that I have gotten waaaay better at listening to my body’s reactions to foods after multiple reintroductions. Reintroduction is a life long process and you will peel back layers and continue to learn things about yourself, which is so fantastic. It’s like peeling back the layers of an onion.

What if I have reintroduced and it really made me feel crappy or it’s a food I don’t ever eat and care about reintroducing? Yes, the by the book answer is you can skip food groups if 1) you have introduced them previously and had a horrible experience you don’t care to repeat or 2) you never eat that food group and have zero interest in testing it out.

With that, you might still consider reintroducing the above mentioned food groups for two reasons:
1) The food you have previously reintroduced with terrible side effects is one you LOVE and would like to see if your gut has healed and you can tolerate it better. Yes, that does happen to some and they are thrilled that they can now handle gluten/GF grains/etc better.
2) There’s a possibility you *might* eat it at some point and want to know how it will affect you. Maybe you don’t eat dairy at home, but there might be an ice cream date somewhere in your future. Now’s the time to capitalize on that clean slate just so you know, even though you don’t eat dairy at home like ever.

And one last friendly reminder from one who struggled with it as well. The foods you are bringing back in aren’t “bad” and Whole30 foods “good” – you are just checking to see if they have negative consequences for you. If not, fantastic, enjoy the heck out of those foods that keep you feeling awesome.

Good luck! Reintroduction is so exciting! Can’t wait for you to learn new things about YOU. 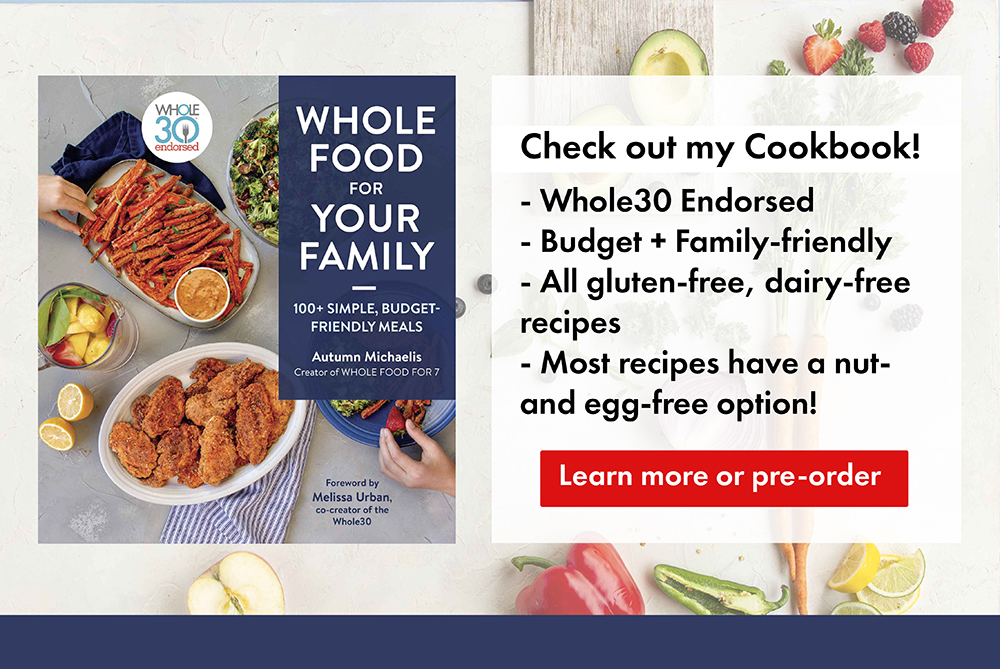